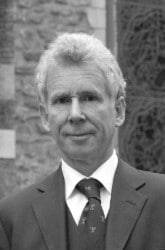 Able and versatile Australian barrister with 35 years’ experience as defence jury advocate and civil practitioner covering an extensive range of both criminal and civil law including a variety of appellate cases in crime, civil and judicial review.

He is registered and conducted many cases on Direct Access and is also a Qualified Mediator.

1982: Admitted as a Barrister and Solicitor of the Supreme Court of Victoria.

PRACTICE; Established practitioner of both crime defence and civil law.

Direct Access: Registered and accepted both criminal and civil cases.